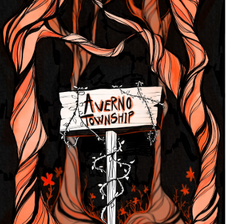 Warning: Averno was a cult. Do not invest yourself in this. Read the statements here: Exverno document[1]

Welcome to the Averno Township Wiki!

In this town, the things in the woods aren’t the ones you need to fear.

Shadows lurk in the woods, ready to take the sinners. The eyes are always watching. Children disappear. Storefronts never change. There are always whispers.

Averno is a new multimedia universe that defies genre and encompasses a play, several musicals, two novels, a TV Show, a podcast, a collection of short stories, and more. Set over the course of 300 years, the through-line of the various projects isn’t a single character- instead, it follows the secrets, lies, histories and mysteries that enshroud the town of Averno. Conspiracies and cults, sinners and saviors, Averno has it all. A love letter to Southern Gothic, the occult, and the seedy underbellies of seemingly peaceful towns everywhere, Averno is a sprawling map of the secrets that intertwine humanity, the horrors we inflict, and the mysteries we can never unravel.

There are people, maybe, in the future that won't know of Averno (and good for them); there might be people right now, as I write this, who don't know of this inner world and thing of beauty for so many people, who decided to look it up or stumbled upon it by accident. So for them, and for those who can't stomach reading the google doc, I write this.

I won't go into detail, because there are many other sources that you can read for detail. But this world was built on the unpaid work of children, and it was an escape for many from families and societies that didn't accept them.

The world, when introduced, was wide and accepting, until you stepped foot in it, and it dawned on you, over a period of the time, that it was physically draining. The cult view was strong, everyone needed to have the exact same belief, the exact same thoughts, and the problem was that somehow, someway, in the way it was phrased, it seemed the exact opposite. Some members of the community were amazing people who just wanted to make art and be immersed in a community with similar ideals and struggles, but the founder and owner of Averno, along with several senior members of the Averno team, was abusive and manipulative, which made the community a dangerous place to be. My point, I suppose, to anyone reading this is: please be careful. This will happen again. I just hope whatever the new Averno is, will be shut down as soon as it is brought up as an idea.

Averno content in itself is not dangerous, so enjoy it, but remember where it came from, and make sure to always take care of your physical and mental health before any fandom or online community. If the community cares about you, they will understand your need for personal time and respect your boundaries.

Over and Out - Cryptid and alien based musical

Wild Ones - Webcomic based around the Wild Ones of the Forest

Works in progress include:[]

Community content is available under CC-BY-SA unless otherwise noted.
Advertisement