Averno Township Wiki
Register
Don't have an account?
Sign In
Advertisement
in: Characters, Sweetbitter, Live from Averno,
and 2 more

It could be argued that Quinn Is the main character of the Averno Universe. While there is obviously no single storyline, Quinn does appear in more media than any other character. Quinn is nerdy, comic-obsessed, socially awkward, quiet, and gayer than the fourth of July. He's new to Averno and starting at a New School in the fall. In the meantime, he works in the archives at the Averno Town Library and at Al’s Grocery

Quinn was born by Willapa Bay in Washington. His mom was a very free-spirited, adventurous woman, and his dad was a pretty simple dude who just wanted to run a woodshop. His mom left when he was very young, and from then it was just Quinn and his dad, Sam. Sam was a good dad—he always tried his best. When Quinn got into fantasy novels, he started taking Quinn on long hikes in the mountains. He loved building things as a kid, so he always took Quinn to the shop. There was no shortage of love—but for Quinn, a nerdy, comic-obsessed, socially awkward, quiet, gay kid- the love was kind of the wrong language. But Quinn knew this was the only family he had, so he buckled down, made the best of it, never rebelled or tried to find something else.

He always wanted to be a writer, had dreams about witches in the woods, always felt a call to something stranger, more magical. But he made do with the woodshop, applied to schools close to home, did what was best for the family. Until one night, he gets this weird feeling, out of nowhere. The urge to just GO. He goes to the computer and sees an ad for A New School (the college in Averno). He applies on the spot. Six months later, he packs up and heads to Averno for a summer job at the town archives, beneath the library.

That’s where our story begins.

Quinn’s spent his whole life putting others first, never choosing adventures for himself. Averno is the first time he’s really chosen anything. Quinn has NEVER had friends before Averno. Not like, real friends. One of his biggest insecurities is that he just wasn’t destined to have a life worth remembering, that friends and adventures just aren’t in the cards for him. This is his whole arc in Bittersummer- his primary motivation is that he wants friends, but the root psychological thing there is that he wants to prove to himself that he is a person worthy of having friends. So in the end, Twinkling Lights is sort of him realizing that while it wasn’t the way he expected, he has completed that arc (the photographs and scrapbook are the physical, tangible evidence of the completion of that arc). He’s very much the “person at the very beginning of their life adventure” type- he isn’t naïve, he’s known loneliness and hardship, but this is really his life starting.

Quinn is the subject of two of the Arcana poems, the Fool and the Hermit. The first chapter, The Fool, runs through Quinn's childhood and his journey to Averno.

After arriving in Averno in the summer for an Archivist position at the Averno Town Library, Quinn quickly falls into a new friend group with Cam, Violet, and Dahlia. Over the summer, Quinn gains and loses the first friends he's ever had.

Dude I don't know anything about Wayward Sisters except that it's about neo-pagan witches, how am I supposed to describe "what role" Quinn has in it? 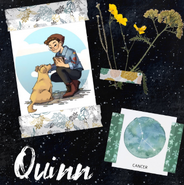 A scrapbook-style character sheet of Quinn

A character sheet of Quinn 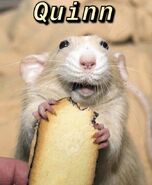 Quinn as a Rat

Community content is available under CC-BY-SA unless otherwise noted.
Advertisement